29th INFANTRY DIVISION OF THE US ARMY

For the 2013 season the museum has an exhibition of photographs and memorabilia to commemorate the arrival of 29th Infantry Division of the US Army in Tavistock seventy years ago.
The exhibition is being organised by Peter Gallie.

For a brief period from about May 1943 until early June 1944 the American soldiers of the 29th Infantry Division of the US Army were based and trained in Devon and Cornwall prior to the invasion of mainland Europe. During their stay many of the soldiers made friends with local people and are fondly remembered by many older residents who were children at the time.

The 29th Infantry Division was constituted on paper in the US Army National Guard on the 18th July 1917, and first organised at Camp McClellan, Alabama. It was an infantry division which was largely recruited from the states of Delaware, Maryland, New Jersey, Virginia, and the District of Columbia, and rapidly became known as the ‘Blue and Gray Division’. This reflected that it was comprised of soldiers from states which had been on opposing sides during the American Civil War; the ‘Blue’ associate with the blue uniforms of the Union soldiers, and the ‘Gray’ associated with the grey uniforms of the Confederate soldiers. The shoulder patch is a half-blue and a half grey circle with a green (formerly black) outer band. The Division’s motto is ’29 Lets Go’, this was taken from a speech General Eisenhower made to the Division before D-Day.

During WW1 the 29th Infantry Division was deployed on the Western Front in France and was involved in heavy fighting during the Meuse-Argonne offensive. After WW1 it was disbanded at Camp Dix, New Jersey but remained a National Guard unit. The Division was reformed when America entered WW2, and on the 5th October 1942 about 10,000 men from the division embarked for England on RMS Queen Mary which had been converted to a troop ship. With a maximum speed of 30 knots the unescorted troopship steamed on a zig-zag course across the Atlantic. It moved too fast for enemy submarine attack, but was considered to be vulnerable to an enemy air attack as it got closer to the English coast. For the last part of its journey the troop ship was escorted by a light cruiser HMS Curacao (D41) which was armed with batteries of anti-aircraft guns. The escort was a slower vessel and in order to keep up with the zig-zagging of the troopship needed to steer virtually a straight course. About 60 km north of Ireland tragedy occurred when the liner bore down on the unfortunate escort vessel. Since the RMS Queen Mary was 81,235 tons and HMS Curacao was only 4,190 tons the cruiser was sliced into two pieces and sank in a few minutes. Many on the troopship felt only a slight shudder. The troopship could not stop to rescue survivors because of the threat from enemy submarines. Of the ships compliment of 338 on HMS Curacao .probably less than 30 men were rescued. This was one of the worst cases of accidental loss during WW2 and the sinking of the ship was not made public until after the war.

The troopship docked at Greenock, near Glasgow and the 29th Infantry Division initially trained around Oxford. In May 1943 they were relocated to Devon and Cornwall with bases at Exeter, Okehampton, Tavistock. Plymouth, Bodmin and Perranporth. From July 1943 the Division was commanded by Major General Charles H. Gerhard and his headquarters were at Abbotsfield Hall (now Abbotsfield Hall nursing home) in Tavistock. They were part of V Corps United Sates 1st Army under Lt. General Omar Bradley and were earmarked for the invasion of Europe. In the build-up of military resources for the invasion there was soon an impressive array of tents and military vehicles on Whitchurch Down, even a field hospital and a landing strip.

During the brief period that the Americans were in and around Tavistock they were everywhere at all times. They played baseball in the Meadows, and there was a social club for them in West Street. In Duke Street there used at be a large garage, Matthew’s Garage, where a lot of work was done on US military vehicles by their own mechanics. Local hostelries did a roaring trade, a particular favourite being the White Hart in Brook Street. The Americans were always courteous and friendly. They loved children and often surprised them with small gifts of chocolate or bubble-gum. Christmas 1943 was a particularly memorable time: the Americans took over for a day the two cinemas in the town and invited all the local children, and generously distributed gifts. They attracted the girls too, and as a result of these liaisons about forty local girls later became ‘GI Brides’.

In early 1944 there were a number of high-rank visits. In February the Supreme Allied Commander Dwight D. Eisenhower inspected ‘H’ company of the 29th Infantry Division at Tavistock followed in March by the Commander of 1st Army Lt. General Omar Bradley who addressed officers of the Division. The Americans then became involved in more intensive training including the ill-feted ‘Exercise Tiger’ on Slapton Sands where the initial landings were rehearsed with live ammunition. Finally, in April, there was a meeting between Eisenhower and the Overall Land Commander, Lt General Sir Bernard Montgomery at Abbotsfield Hall: there is today a plaque above the fireplace recording the meeting in the room they used. 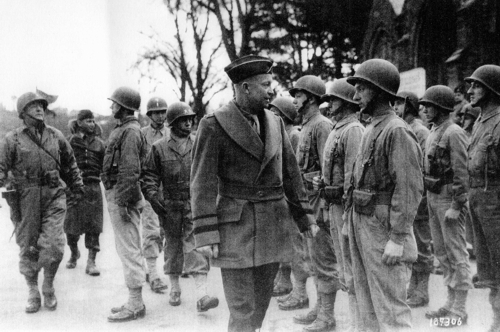 One day in late May 1944 the 29th Infantry Division left Tavistock. Hundreds and hundreds of soldiers, four abreast, marched silently down from the Whitchurch Road, crossed the Abbey Bridge, wheeled left into the Plymouth Road, then down the Plymouth Road passed the Drake Statue, and beyond. They wore steel helmets, and carried packs and rifles. A large crowd gathered to watch but there was no cheering nor flag waving, no bands played, just the tramp tramp of their boots and the occasional sobs of a local girl. Everyone knew something ‘big’ was about to happen.

Two American Army Divisions, the 29th Infantry Division and the 1st Division (Regular Army Division) were landed at Omaha Beach in Normandy as part of Operation Overlord on the 6th June 1944 to re-capture mainland Europe from German occupation. The 29th Infantry Division’s 116th Infantry Regiment made up one of the two initial assault forces. Very little went as planned. Difficulties in navigation caused the majority of the landing craft to miss their targets throughout the day. They encountered opposition from well-entrenched German forces and in the early stages of the landing the Americans were pinned down on the beach by heavy German mortar and machine-gun fire which caused horrific casualties (around 3,000 plus) in a short time. Finally, after bloody fighting, the beachhead was secured, and in the second wave the 29th Infantry Division’s 115th Infantry Regiment landed, later the entire division came ashore.

Once inland the 29th Infantry Division was involved in bitter fighting in the hedgerows of Normandy. It helped capture St. Lo in a fierce and devastating battle, moved on to take Brest in the Brittany Peninsula, and by the end of the war had fought their way across Western Europe into Germany. After VE Day they were on duty with the occupational force in Germany until the end of 1945, and returned to the United States in January 1946. They were demobilised on the 17th January 1946 at Camp Kilner, New Jersey.

The 29th Infantry Division was one of the most illustrious US Army outfits of the Second World War. It was in combat almost continuously for eleven months from D-Day to VE-Day, and during this period suffered 20,111 battle casualties including 3,720 killed. It gained four campaign ribbons for service in the European Theatre and was awarded the prestigious ‘Croix de Guerre Avec Palme’ by the French government for its exemplary service at Omaha Beach on D-Day. Today the 29th Division exists as a reserve division made up of National Guard troops.