Mary Freeman died on the 4th March 2018, aged 93. During her working life she was a marine scientist of international repute, and in her long retirement an acknowledged expert on the history of Tavistock.

Born Mary Whitear at Teignmouth in 1924 she attended the Maynard School in Exeter, coming in by train daily even during the 1942 bombing of the city in which the school was damaged. Mary was academically gifted and progressed to University College, London where in 1947 she was appointed a lecturer, and remained there until 1989. Her working life was spent studying the neurology and cellular structure of fish and amphibian skin. At University College she met her husband, Richard Freeman, who worked in the adjoining zoology room. They had two children Felix and Peter. 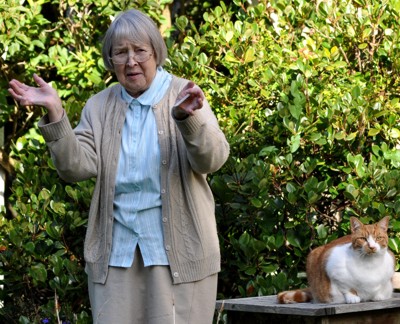 Ann Pulsford, a marine scientist and neighbour, states that Mary was well known and respected for her marine studies. Mary published a series of papers on the fine structure of elasmobranch, teleost and amphibian skin in adult and larval stages. Using histochemistry and scanning and transmission electron microscopy she described the epidermal cells, secretory cells, pigment cells and chemosensory structures in a wide range of species. Using these techniques, she linked structure with function in processes like wound healing. She also undertook experiments on the behaviour of shore rocklings in the detection of food and found that the anterior dorsal fin could be involved but was not essential for foraging. Mary’s papers were published as a single author or with her collaborators in the most respected scientific journals. She also published book chapters.

In 1989 Mary retired to live at Parkwood Road in Tavistock where she took great delight in her Victorian villa and its garden. She soon acquired an interest in the medieval abbey, foundries, and early industries of Tavistock. Mary became an active member of the Subscription Library and a long serving Secretary to the Tavistock History Society. A particular interest was the small cottage garden in the Guildhall Square, an oasis of greenery in an otherwise barren parking lot. Both here and in her own garden she redefined what was a ‘weed’. She respected all creatures and believed ‘all animals had a right to life’, and back at home there were generations of cats, and a tortoise.

Sue Davies, formerly manager of Tavistock Museum and long time friend, states that Mary was a brilliant researcher of our town history. From her working life she brought to local history a new and more professional approach which set a high standard for thoroughness and attention to detail. Over many years she supported the town museum and contributed a number of informative articles about our town history. She also actively supported the Subscription Library and at her own expense paid for a number of its important books to be repaired.

Helen Harris, a local author and friend, remembers Mary Whitear (as she then was) from schooldays at the Maynard School, Exeter:

“She was three or four years ahead of me. I recall her as being slight of build, and with fine features. We were not acquainted then, but as it is not unusual in a large school of 400+ girls, younger pupils may remember older ones, but not the reverse.

“We met again in later years, following her retirement move to Tavistock. She was developing interests in her home county and joined the Tavistock Local History Society, the Devon History Society, and the Devonshire Association. Often she joined me (and Mabyn Martin – another former TLHS member who sadly also died very recently) in attending meetings in different parts of the county.

“Mary used her considerable research abilities to produce articles for The Devon Historian ( journal of the Devon History Society, of which I was then Honorary Editor):

“She also presented a paper to the Devonshire Association, (with Ann Pulsford) published in the Transactions 2015: ‘John Taylor (1779-1863) and the Tavistock Canal’.

“She was a good friend, and I shall miss her.”

Roderick Martin, the present manager of the Tavistock Museum, states that in his opinion Mary was an outstanding local historian. Over many years she supported the town museum and contributed a number of short informative articles about our town history which we now sell in a leaflet format. It is intended that in the future these will be put on a CD for general sale. In her lifetime Mary was not interested in writing popular history but I believe it is important that her many years of research into the early history of our town are not lost.

Mary was always very generous with her time by very willingly proof-reading and grammatically correcting the written works of others. She enthusiastically read and improved manuscripts. Very recently she was involved with the initial review and the proof reading of Robert Waterhouse’s new book on the Tavistock Canal – Its History and Archaeology. It is good that Robert’s book was published last year while Mary was still alive. After the book signing he visited Mary at home to present her with a copy, and to thank her for her help. A gesture she very much appreciated.